Six years ago we bought our first miniature dachshund puppy. Nobody warned us (until it was too late) that this breed is genetically wired to burrow into their owners’ beds at night. Now, we stop everyone we see at the human end of a leashed dachshund, asking where their dog sleeps. The results of extensive intercept-research: doxies in owners’ beds, 99%. The other 1% must be too ashamed to tell the truth

Our first wienerdog, Moxie, was confined to his crate at night without any memorable fuss. We did keep his crate in our room — clearly a bad decision seen in hindsight. About ten months later, we brought in Archie, another miniature longhaired doxie. From day one, Archie wailed and fussed pitifully in his crate.

If you have kids you probably recall the time(s) when you flagrantly ignored the pediatrician’s advice about crying babies (as well as conventional, communal, grandmotherly wisdom) and caved-in to the crying when your infant howled for more than five minutes.

Baby tending was in our distant past, and we couldn’t stand the whining. We relented. But, when Archie was released from confinement some kind of canine brotherhood thing kicked in: they quickly “got it” that there were two of them vs. two of us. Never mind the triple-digit differences in body weight and height between the 2-legged team and the 4-legged conspirators. The challenge was on. And they had a decided edge in both cuteness and persistence.

In short order, my husband and I each had a small long-dog glued to our respective sides at night. They nosed-in under the covers, and adhered to our legs, torsos, hips. Despite their brazen advances towards our pillows, we’ve learned to live with them strategically plunked down around us.  We’ve become sound but cautious sleepers, keeping to the bed’s perimeters. Although they each weigh only 12 pounds, they defy veterinary science and transform into big, heavy dogs when tucked in with us.

A mental lapse of special magnitude brought on the arrival of Dog Three, an indisputably adorable Havanese named Cubbie. Rationalizing his presence after the fact, we correctly assumed that the third dog would tip things dog-wards. We also imagined (incorrectly) that the growing pack of dogs would happily settle in with the equally-growing assortment of comfy-looking pet beds strategically placed in our room and throughout the house.  Never happened. The unoccupied pet beds in our bedroom now provide a challenging obstacle course when I stumble towards the bathroom during the “wee” hours of the night.

Cubbie and his crate didn’t spend any time together. Maybe we never even set it up; our memories won’t fact-check. A non-doxie, he quickly picked up their habits, asserted himself bed-wise and commandeered a spot on my right, relegating Archie to the shifting space between my husband and me. Moxie controls his real estate between Rob and the edge of the bed.

The 3:2 ratio defines our sleeping lives. We creep in and out, careful not to “waken sleeping dogs.” We endure damp muddy paw prints during rainy season, and a horticultural textbook’s worth of leaves, twigs, buds, and petals throughout the year. Lately, Archie’s taken to hunting (and killing) squirrels and mice, but thankfully, he can’t hoist himself and a carcass up to the mattress.

One recent morning, as we huddled together on one edge of our bed, we groggily thought that maybe one more dog — a big one that surely couldn’t fit on the bed – just might, possibly, inspire the others to move back to where they belong. 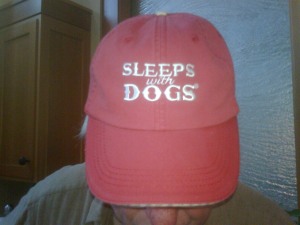 2 thoughts on “Sleeping with Dogs”